In theory class last week we discussed Harriet Martineau at some length. (She fits in perfectly after teaching Durkheim and before Veblen.) My students are intrigued by the ideal that Durkheim borrowed her ideas, since she was writing about similar epistemological and substantive topics and because the French version of her translation of Comte’s Positivist Sociology (even Comte preferred it over his own) could have been in his hot hands at Ecole Normale Superieure: she translated it in 1851 and he was at the school by 1879. Also, her How to Observe Morals and Manners was written in 1838, well before Emile’s Rules of Sociological Method (1895). I could not prove or disprove such suspicions, so if anyone knows of anything, feel free to let me know.

Relatedly, perhaps, there’s a provocative article that came out last month on the ‘feminization of sociology,’  (and I found an earlier one on the related ‘decline’ of the discipline). I’m not sure about the word choice here, but it is assuredly better than other forms of describing it (e.g., ‘female zoo,’ ‘female ghetto,’ ‘female asylum’).

A Times article highlights the rise of non-tenured labor, fleshing out a few more issues than the AAUP report I linked to earlier.  The American Federation of Teachers‘ proposal for legislation in eleven states–to increase numbers of classes taught by tenured or tenure track faculty to 75%–seems unlikely since that demographic comprises only 30% of the faculty in the U.S. To be continued…

**Addendum: Scatterplot blog has a nice discussion about this sort of thing as well…

NPR had a piece on how an Iraq vet is now taking sociology classes at my alma mater:

(Thanks to Kristina B.)

I think I’ve said this somewhere before, but when I saw John Edwards speak at Hunter College two years ago, I was very impressed with how he had developed his ‘Two Americas‘ meme into a story about spatial segregation. Perhaps I’m jaded, but it was refreshing to hear a politician speak on this.

Last week we watched part of Spike Lee’s documentary When the Levees Broke and discussed it alongside the first few chapters of Philippe Bourgois’ In Search of Respect to talk about issues of politics, culture, race, and space. Space is a rarely discussed issue in sociology, save for a few ethnographies (Dave Grazian speaks of this gap in his fabulous Blue Chicago)

One sociologist at the forefront of these concerns (and not an ethnographer) is John Logan, who has provided a report (pdf) on Katrina as a social disaster. Here’s a image from it:

I’m always fascinated by memory maps, and one of the lovely (and distracting) things about the InterGoogle is that there are wonders that are just a few clicks away. I have no idea how I reached this point, but there is a great Flickr collection of memory maps which are, at times amusing. There are others that highlight notions of spatial inequality. Here’s Ithaca, NY. Here’s London: 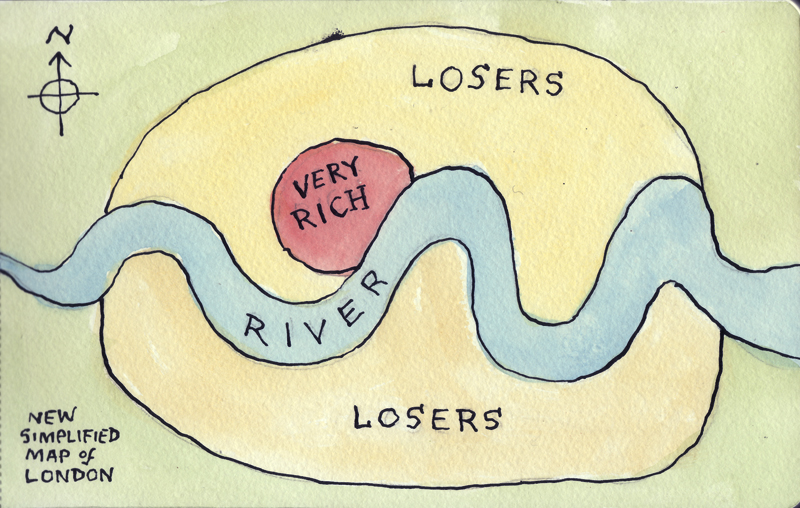 By the way, if you are an educator, HBO films provides education packs for free. Check out ‘Teaching The Levees,’ a collaboration between Teacher’s College and HBO. I suggested that we have a ‘Sociology 101 Movie Night’ to get the three 101’s using the same films (out of class) to energize class discussion… Pretty cool. It’ll be interesting to see if we can organize it.

Artist Jill Miller trained herself as a licensed private investigator to then do undercover surveillance of the everyday lives of private art collectors. Odd, but true. I like how, in her description of the project, she “estimates she did surveillance on ten houses, focusing on five in depth.” Um, ‘estimates’ ten? I question her competency already. For something a little more scientific, check out Howie Becker’s Art Worlds. He has a smashing website as well, filled with many of his more interesting essays. I am fond of the ones on Calvino and Perec. Why wouldn’t I be pleased when a sociologist uses two of my top books of all time, Invisible Cities and Life, A User’s Manual? And he includes a link about my hometown of Buffalo. What more could a man want? I’ve been thinking a lot about Calvino’s book (check out the old cover, the nautilus shell and, are those mirrorballs?) in relation to my walking tour guide project since it circles around Marco Polo’s storytelling to Kublai Khan of all the cities he’s been to. In the book one starts to wonder whether or not all of these ‘cities with eyes,’ ‘continuous cities,’ ‘thin cities,’ aren’t all just Polo’s hometown of Venice told and retold again.

Having nothing to do with sociology, or the usual stuff on this thing. I really must say that I’ve been enjoying Panda Bear, making me suspect the better instincts of Animal Collective are thanks to Noah Lennox.

Slate had a nice set of blurbs about what ‘great books’ authors have not read. The Bible. Gravity’s Rainbow. Moby Dick. Harry Potter. Aside from the obvious question of whether or not a Harry Potter book is ‘great,’ I’m happy that I’ve covered those. (Ok, three-fourths of the Bible.) Faulkner. Ulysses. The Brothers Karamazov. I have just not gotten to and suspect I should. I’ve read more than the average American, I’m sure, but at times I need coercion: I had to bring Gravity’s Rainbow as my only reading material for a trip to Europe to force myself to get through it. The same with Quixote on this summer’s trip to Scandinavia. I was once with a famous sociologist and s/he asked what I was teaching in my theory class that day. I said, excitedly, “The Frankfurt School.” “Who’s that?” s/he asked. At the time I was appalled, but maybe I’ve mellowed out over the years, or realized that I have plenty of blindspots of my own.

One of those blind spots is the entire populist oeuvre of Jonathan Kozol. Maybe it’s because I missed a general education in my undergraduate studies while studying architecture (I took a year off between college and grad school, in part, to catch up on Hemingway, Kafka, Calvino, Ondaatje, and the like), but I never got around to Kozol, who must be assigned in every third undergraduate class. Regardless, Kozol gave a talk at Mt. Holyoke College to promote his new book. It was mostly pretty interesting, but he kept insisting that ‘sociologists’ were to blame for the mechanized, overly rationalized No Child Left Behind. Wa? He also complained about academics who use big words, like ‘hegemonic’ and ‘Hegelian.’ As one of my students told me afterwards, “He sure didn’t seem to have any qualms about ‘pedagogy!”‘ I’ve always thought that I’d like Kozol, and I admired his better instincts, but I was a little underwhelmed.

Other ‘classic’ social science books I need to read? Hmmm. I’m still hoping to get to Origin of the Species. (Interesting fact, maybe: Robert E. Park and Ernest Burgess’ An Introduction to the Science of Sociology–the ‘Green Bible’–includes some real interesting gems, including Darwin. We’ll be reading essays of Darwin’s on Blushing and Emotions from there our theory class this semester. It’s nice to think of the very foundation of our discipline in the U.S. is a little more interesting that we think.) Others?

(As a postscript, mention of Kozol’s concerns over language sparked a fabulous discussion about Durkheim, education, and stratification in theory class yesterday. Sharp thoughts that tapped into all sorts of issues of race and power.)

Now that I no longer live in Williamsburg, I miss out on the McCarren Pool parties. It was one of those ideas that just was so brilliant it took off and became co-opted in the span of 30 seconds. Being at these shows was a blast the summer before last, and I’m sad to have missed Every Single One this summer. (The free ones are the brain-child of my good friends at Jelly NYC, FYI. It was their idea first, Live Nation!) I take small comfort from the fact that the Times has allowed one of my favorite blogger people, Andrew Kuo (in the blogroll on the right as ‘Emo + Beer = Busted Career‘), to provide his chart-review music events, most recently, on the Pool Parties (and here’s one of Cat Power). I’ve said it before, this guy’s a hipster Edward Tufte. Here’s a part of the chart (click here to see the rest):

Just imagine if the AAUP delivered a similar chart for the news a few posts down. Suffice it to say, I’m going to begin to push my students to think about different kinds of presentations of data…

A student passed along this old piece from The Onion. I guess the upshot is that getting students to connect social theory to everyday issues is out there in the zeitgeist, which is a good thing. Parody from The Onion, however, less so. There’s even a nice echo of what I have to write in the margins every week:

Basile, who has not yet decided on a grade for Hoyer’s paper, said he encourages “thinking beyond the textbook” and has no problem with students expanding an assignment to incorporate non-traditional subjects like punk rock. He noted, however, that he “would ideally like to see at least a 50/50 ratio.”

“Look here on page 6. This long section on the anti-societal statements punks made by wearing torn clothing and dyed hair is an obvious place to work in something about Durkheim’s distinction between societies maintaining mechanical versus organic solidarity,” Basile said. “But instead, he just keeps hammering home the same point about Malcolm McClaren’s ‘Sex’ shop.”

There was an error retrieving images from Instagram. An attempt will be remade in a few minutes.

Error: Twitter did not respond. Please wait a few minutes and refresh this page.