Save for watching Time Bandits, I almost never think about ‘the future.’ But I was reading danah boyd’s piece on ‘blogging outloud’ wherein she asks:

Although they do exist, very few blogs are about culling knowledge into an archival form. But this does not make them worthless. Why do libraries keep letters from the 18th century? Historical artifacts tell us about the people who lived at a particular time.

Which got me thinking about the ways in which blogs serve as semi-permanent documents of ephemeral thoughts of a certain kind of person. I wouldn’t say ‘the masses,’ but 112 million blogs isn’t exactly chump change either. Reading Natalie Zemon Davis’ ‘Printing and the People‘ and how New Cultural Historians had to come up with creative ways to understand the oral and written culture of the masses in the 16th Century (e.g., death certificates, etc.), I began thinking about the record that may be left behind from today forward… And as Google seeks to cataloge any data it can find, I certainly meditate on the frailty of this medium, and the obvious issues of public and private good… The University of Michigan, in its collaboration with Google, has just celebrated digitally archiving its one millionth book. (Read more about the ‘Googlization of Everything’ here.) 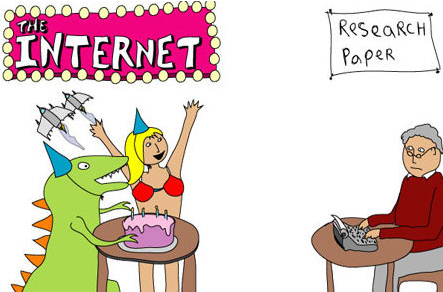 Via Kristina B (thanks!), Danah Boyd writes a great essay on open-access academic journals. I’m thinking it over…

Amended: With a little additional snooping, I caught the news that Harvard is having all ‘finished’ articles by Arts and Sciences faculty free and online. Here’s a clip:

The decision, which only affects the Faculty of Arts and Sciences, won’t necessarily disrupt exclusivity agreements with journals or upend the academic publishing industry, but it could send a signal that a standard bearer in higher education is seriously looking at alternative distribution models for its faculty’s scholarship. Already, various open-access movements are pressing for reforms (from modest to radical) to the current economic model, which depends on journals’ traditional gatekeeping function and their necessarily limited audiences but which has concerned many in the academic community worried about rising costs and the shift to digital media.

I’m mulling it over some more…

You can’t get a better example, or at least ‘more classic example,’ of video sociology than William H. Whyte’s ‘The Social Life of Small Urban Spaces.’

Understanding media and technology through the lens of politics is always fascinating, but in class we talked about the Lincoln/Douglas (seven hours! a break for dinner! liquor on sale!) and Nixon/Kennedy Debates and it was very fun. (Read this, which goes into a little detail about how people on the radio thought that Nixon had won, but people who watched it on television got to see Tricky Dick drown in flopsweat.)

Anyway,  Krugman had an interesting op-ed, which gets at the money and media. About Hillary’ town hall meeting, broadcast on the Hallmark Channel in comparison to the will i am Obama video:

The Hallmark show, enacted on an anachronistic studio set that looked like a deliberate throwback to the good old days of 1992, was equally desperate. If the point was to generate donations or excitement, the effect was the reverse. A campaign operative, speaking on MSNBC, claimed that 250,000 viewers had seen an online incarnation of the event in addition to “who knows how many” Hallmark channel viewers. Who knows, indeed? What we do know is that by then the “Yes We Can” Obama video fronted by the hip-hop vocalist will.i.am of the Black Eyed Peas had been averaging roughly a million YouTube views a day. (Cost to the Obama campaign: zero.)

(Hillary was, in fact, cut off mid-sentence for the regularly scheduled programming, A Season of Miracles.)

I’m pretty mixed about facebook, and by ‘mixed’ I mean mostly underwhelmed. I have tried it out over the past month to see what it is like, particularly since I’m teaching this Technology, Media & Sociology course. So far, it has proven a useful way to get connected with some acquaintances who I never really had a chance to build a friendship with and a way to get into touch with people whom I don’t see any more. I know that it is supposed to be impressive and social networking is the future, etc. But I’m just not too jones about ‘poking’ and ‘movie quizzes.’

Anyway, a student sent me an interesting read in The Guardian (didn’t I hear that they were coming out with a US rag?), ‘With Friends Like These,’ which details the social networks of the two main venture capitalists behind Facebook. It’s a little paranoid, but good to think about–especially when read alongside Paul Starr’s wonderful The Creation of the Media–so long as you can get around temporal logic like this:

After 9/11, the US intelligence community became so excited by the possibilities of new technology and the innovations being made in the private sector, that in 1999 they set up their own venture capital fund…

Still, one of the key points of the article explores the economic profiteering of social ties:

Clearly, Facebook is another uber-capitalist experiment: can you make money out of friendship? Can you create communities free of national boundaries – and then sell Coca-Cola to them? Facebook is profoundly uncreative. It makes nothing at all. It simply mediates in relationships that were happening anyway.

(By the way, if you watched the Grammys, the ‘underwhelmed’ link has a performance that is a million times more entertaining. I watched about 10 minutes and it was sooo bad. ZZZ. Atrocious. I did like Kanye’s jacket, though.)

Sometimes I say things in class and I don’t know where they came from. A mixed bag of good and bad, usually. Today, after a long discussion of all the issues raised in the first eight words of a book, I said:

‘I was forced into crack against my will’ is the ‘Call me Ishmael’ of the social sciences.

I’ve had a good deal of back and forth with people over Gang Leader for a Day, and Scatterplot has had some posts and comment/discussion on some interesting issues as well. Mitch Duneier has an interesting post on ethics and IRB, and also links to Jack Katz’s work on it, here, with a draft essay on the ‘ethical escape routes’ for underground ethnographers. This essay looks like it will become mandatory reading in my qualitative course–whenever I get to teach it again–because it deals with many of the historical and current tensions of IRB. Particularly the section on ‘How Fieldworkers Become IRB Outlaws.’

Error: Twitter did not respond. Please wait a few minutes and refresh this page.